Better the sharp acidic honesty than a sickly-sweet hominem praising the error ~
(In other words, it’s better someone telling you you’ve fcuked-up than them lying) ~
.
America fell foul to social-engineering for dishonest purposes in a pretty-big way, and the best way I’ve ever heard to describe it, bearing in mind America’s culture of metrosexual suck-cocker’s moving forwards, is to state the true ‘AGENDA’ guiding America was set many years ago by the power of the money that was stolen from them (1929) and then, as happens when the ‘POLICY’ for change is only relevant to an unexplained agenda that the stolen money itself set, what always followed after that was the agenda and it’s policies got into bed with the money that owned them, and then when any difficulty came up, the agenda and it’s policy got into a tight 69 while doing a ménage la-trois with the money, both of them in what amounts to a spiritual and intellectual ménage la-trois in which both desired to please and be pleasured by the other, always in the process of also pleasuring the money that owned them ~
.
Crappy way of explaining it yet, if you think about it, accurate & self-explanatory ~
(Your political & media masters think you’re all too dumb to understand America) ~ 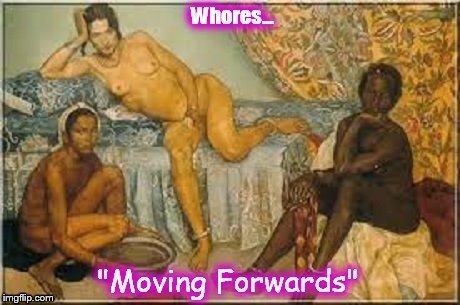 Into The Persian Gulf

Following its “visual to the world” message last night by test-firing an ICBM, America appears to shifting to ‘big stick’ diplomacy. Following Iran’s naval drills last week (attacking a replica US aircraft carrier), Sputnik News reports that as the nuclear negotiations between Iran and the P5+1 nations come to a head, the US begins Eagle Resolve, a massive military exercise in the Persian Gulf. Eagle Resolve will involve tactical exercises from the US Army, Marines, and various other military branches “with simulated portions of the exercise based on a fictional adversary.” Careful to ensure Obama does not lose his Nobel Peace Prize, a CENTCOM official explained, “the exercise is not intended as a signal to Iran.”

With the support of regional allies, the US moved nearly 3,000 military personnel, as well as “air, land, sea, and special operations components,” into the gulf. Taking place just off the coast of Kuwait, the exercise will continue through the end of the month, and is meant to improve the military’s response time should an incident occur in the region.

When a country has become so politically correct that it cannot admit that it is conducting a military exorcize to intimidate an adversary than it has already lost the war. We are in a big need for a Winston Churchill. He didn’t give s**t about a Nobel Peace Prize.

America needs a ‘MAGIC-MIRROR’ so they can begin to see themselves as the rest of the world sees them ~ Seriously ~ You guys are that busy running away from who you are and what your leaders have really done to you, and you get more than a little manic as you keep trying to hide everything from yourselves that you don’t wish to acknowledge ~ Things like which future US 1970’s Assistant Defence Secretary and later 2001 Defence Secretary shot JFK in the throat from the Grassy Knoll, and which future 2001 ‘VP’ blew his brains out over the boot of the Caddy is a place to start 😦

Then, just work your way forward to exactly ‘WHO’ was running shit on 911 in the real world, ignoring who they were doing it for until you finally really get to admitting who literally did what, and it’s like ‘ALLAH-KHAZZAM’ along with a bit of magical Penn & Teller hey Presto as all is revealed from behind the veil of Zion’s lies   😉

Your ‘MAGIC-MIRROR’ will reveal who’s the most beautiful whore of all 😉 .

I’ve often suggested that, in the real world, since Israel is determined to act like a fascist thug with big brother America’s muscle and money anyway, that they just declare a border any damn where they choose (On the wall?) and then pay fair market rates for ‘ALL’ of the land and water they’ve taken since 1967 as well as undertake to put a 3 lane underground highway between Gaza and the West Bank using Palestinian labour and Jewish money so Palestine can function as a working state again  😦

Pretty damn simple and no joke  😦

I’ve also suggested that America needs a 100% amnesty over treason going back over the last 55 years, simply in exchange for those involved telling 100% of the truth about it to a lawfully constituted Federal Grand Jury (Jewry?) as the only way America will ever hear truth in politics and media this side of the angry invisible omnipotent omnipresent Jewish cosmic magician returning to judge the world with Jesus Christ sitting in his right hand ~ Now seriously, the last bit of that about Jesus Christ is sarcasm, yet taken in context with the first comment about the US being such a beautiful whore, is it a joke? ~ Well here’s a real piece of sick humour, pathological sardonic wit, and philosophical bile in the context of Israel and it’s Abrahamic god in the next section, yet how could a little bit of sarcasm turn two sound positive suggestions and a dead serious appraisal of America’s Zionist-led post JFK and then post 911 delusions into a joke? ~ Wake-up fools, before you kill us all  😦

Senator Rand Paul reacted to Ted Cruz’s announcement that he would run for president by declaring that he is the only Republican candidate that could beat Hillary Clinton in a potential 2016 run off. (Don’t press the button, it’s a picture)  😉

“My polling – the polling that’s out there so far – nobody is doing better against Hillary Clinton than myself because we’re already picking up three to five per cent or more of the independent vote above what the others are picking up,” Paul told Fox News, adding, “Right now, I’m the only one that beats Hillary Clinton in certain purple states, I’m the only one that also scores above all the other Republicans in whether or not I could beat her.” A Real Clear Politics average of polls shows Paul scoring highest out of all the Republican candidates against Hillary Clinton in a head to head match up.

dude is a judas goat, just like Jones, he sold out just like his daddy did and will lay down for a few pieces of silver. Anyone who believes in politicians is a fking idiot. (again for the record, I have no problem with the faith… I just don’t oblige people who ceremoniously sell themselves out to foreign/international interests/lobbies) This guy is no different than any of the rest, anyone who believes in him has been pumping koolaid in to their veins for far too long.

Robby Daniel the heretic 😉 (To) pcxmac • 26 minutes ago

Oh omnipotent omnipresent angry invisible cosmic magician who made the universe in the blink of an eye & made the world in 6 days, we who are your humble servants humbly (sic) beseech thee to go back and start again 😉 . Don’t you think 6 days was rushing things a bit, all things considered? 😉 Next time round, how about leaving Lucifer out of it? ~ That was dumb 😉 Maybe you should’ve spent 6000 years thinking things thru a bit more? 😉 . I’m not trying to be rude mind you, you being the Lord God Almighty etc 😉 But still, was that really necessary? ~ We could have got by without him 😉 Please hear the prayer of thy humble servants, if you really even exist that is 😉 If the Jews just made you up, then forget this prayer & go back to sleep 😉 .

THIS ONE SERIOUS YOU THINK?   😉

Senate Armed Services Committee Chairman John McCain has called it a “gimmick,” and Democrats complain that larding up the separate war funding bill with extra spending amounts to an “abusive loophole.” Yet so far, the massive increase is likely to remain in this year’s budget. Another major criticism of the process has been its common use to fund favored projects and other items not directly tied to the war — a trend that has steadily grown over the years as the wars in Iraq and Afghanistan dragged on and the Pentagon loosened the definition of war-related spending.

Just one more reason for Jeb and Rand to pack their bags and piss-off 😉
One more reason for Ted Cruz to reconsider his new attempt to pretend 😉
John McCain for president in 2016, cause, you’re already fcuked, right? 😉
. 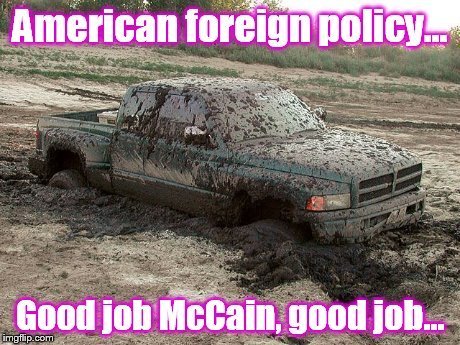