Remember what it was you forgot yet, America?  😉

The New York Times’ Maureen Dowd captured the moment last weekend when she referred to former Secretary of State Hillary Clinton as “the midwife to chaos” in Libya. Ms. Dowd apparently came to that conclusion after watching Mrs. Clinton bobbing and weaving and admitting and denying as she was confronted with the partial record of her failures and obfuscations as secretary of state, particularly with respect to Libya. The public record is fairly well-known.

In March 2011, President Obama declared war on Libya. He did this at the urging of Mrs. Clinton, who wanted to overthrow Libyan strongman Col. Moammar Gadhafi so she could boast of having brought “democracy” to the region. [….]

Rigor Mortis gozounlimited • an hour ago

Wonder what that “One Thing” she had on her mind was? ~ Could it have been that 30+ years hoard of gold bullion M Gaddafi had prepared for his Zionist masters by almost exclusively trading Libya’s oil for gold bullion all the time then, could it, can’t be ‘THAAAT’ cause otherwise there’d have been some type of record about it all stashed somewhere, like the ‘Weapon’s Inspectors’ found in Iraq somehow?  😦

Wonder if International Zionism used ex ‘DELTA’ mercenaries to move it? 😉
If it happened of-course, all that missing gold suspiciously going missing 😉
.
Meanwhile, the name of the game is ‘Catch an illuminated Masonic Rat’ 😦
Catch them in their lies with a 100% amnesty for treason back to ‘JFK’  😦

gozounlimited (To) Rigor Mortis • an hour ago

Or could it be the federal reserve sending 500 million dollars

Rigor Mortis (To) gozounlimited • 3 minutes ago

Think Iraq is still shitty cause ‘Someone’ (Eck) misusing US Military resource stole Iraq’s 30-40 years of gold bullion? ~ Think Iraqi’s are shitty what happened after to shut them up? ~ Think Syrians are still shitty over Gaddafi giving ‘THEIR’ gold to his Zionist masters? ~ That $500 million that ‘CIA’ gave to Sunni and Shia Iraqi’s prior to the Gulf War Two thing, the $500 million they (In part) then used to buy explosives for the ‘IED’ attacks on the black market in Iran, you think ‘THEY’ remember that too, them Iraqis? ~ Or, maybe not 😦
.
Your poor children America, your poor bloody children 😦
Headfcuk’s on the left, headfcuk’s on the right, ‘FAARK’ 😦

Poor bloody vets for that matter ~ Heart’s breaking yet guys? 😦
“The Lord” he certainly moves in ‘Mysterious ways’ don’t he 😦
Welcome to the heartbreak club, been there 50+ years now  😦

Et.Tu.Britass (To) Rigor Mortis • an hour ago

You think Hillary Clinton is one of ‘THEM‘ other account do you? 😉
You know all those ‘THEM‘ do you? ~ You know, those illuminated 😉
.
Think they (Them) had the resources to steal all that gold maybe? 😦
You think they (Them) were the ones that pulled ‘Fought Nox‘ off?  😦

Spy head: No ‘direct evidence’ of

American intelligence officials have not seen anything concrete to indicate that this weekend’s crash of a flight traveling from Egypt to Russia was caused by terrorists, the nation’s top spy said on Monday morning. That’s despite the fact that extremists associated with the Islamic State in Iraq and Syria (ISIS) have claimed responsibility for shooting down the jet, killing all 224 people onboard. “We don’t have any direct evidence of any terrorist involvement yet,” Director of National Intelligence James Clapper said at the Defense One summit in Washington. ISIS has a “very aggressive chapter in the Sinai,” Clapper added, referring to the Egyptian peninsula where Kogalymavia Flight 9268 broke into pieces before hitting the ground.

(Of their lying crap)

Rigor Mortis (To) byjove • 4 minutes ago

Now, it is indeed a place of human sacrifice, deception, lying, perversions, and a total loss of true spiritual freedoms, unlike the Judeo Xtian heritage which were never found to have a single lying warped demonic pervert among them, except for one of the popes in the 6th century who used to be carried thru Rome in a paladin and choose various men women and children to be forcible dragged back to the Vatican for sex and ritual murder ~ Those who search and seek will find reference to all forms of perversity in the bible from David and Jonathon getting a little too ‘Lovey Dovey’ up close, to Solomon erecting altars to Molech for child sacrifice ~ Nothing is what it seems anymore, and probably never was either, Ay Freemasons  😦

Now in an enlightened age 2 jets bring down 3 skyscrapers you wankers?  😦

And one-guy who looks a bit like another guy is good enough?  😦

That’s a Ray Stevens song above, a mildly witty bit of musical fiction  😦 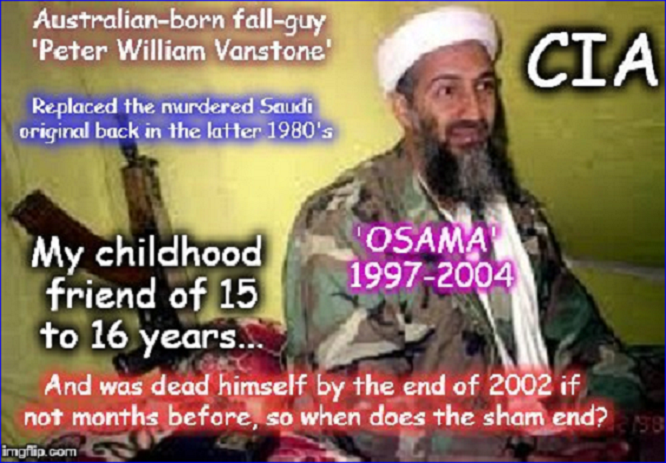 Who (Really) had the means to do the crime, like setting the charges in ‘Building-7’ and getting the gold into that truck that got stuck under the Trade Center, as well as getting ‘NORAD‘ to stand down for 2 hours and the Air Force to fly off to Alaska so their 120 mile attack radar wouldn’t be able to challenge or confirm any official story about jets, no jets, or even plant a story in the media about one wing falling off in a car park 100’s of yards away from the Pentagon to confuse people  😦

As far as motive goes, you ‘COULD’ claim that Al Qaeda was insane enough to start a war with what at the time was said to be the world’s #01 superpower so they could all be killed as has happened ~ However when it comes to motive, obviously Al Qaeda, run by an illiterate ‘CIA’ controlled ‘FAKE’ in an Afghan cave had the greater motive to do the crime seeing as Cessna pilots could easily ferry Iraq’s 1000’s of tons of missing gold bullion out of their country in Cessna’s 700 ponds at a time to destinations unknown, and thus had the means opportunity and motive both to perform the crime and to get away with it afterwards ~ Again, by referring to “The Crime” I’m referring to far more than just the attacks of the day, I’m also referring to all of the times since then when “Means motive and opportunity” were present for further crime like milking $18 Trillion in interest payments from the US Fed deficit, or canceling 2\3 of the US Constitution with patriot acting, or even the extra judicial jailing’s and killings of the ‘NDAA’ act ~ To those who know what the Govt and state x Zionist media wont admit, questions such as “Where such crime was then successfully pursued, did ‘ANY‘ of these crimes occur when suspects either had an alibi such as being dead already (sic) like the original Saudi Osama was waaay back in the 80’s, or dead like his Aussie born lookalike double pictured above was by 2002?” ~ Or do they look and sound guilty as sin but present a wall of Masonic defiance with a defense capable of standing up in a court of law at ‘The Hague’ such as the permanent ‘Plausible Deniability’ of anything America’s Masons are or ever were accused of relating to any factual issue in dispute ever since their assassination of ‘JFK’ to this very day here and now?  😦 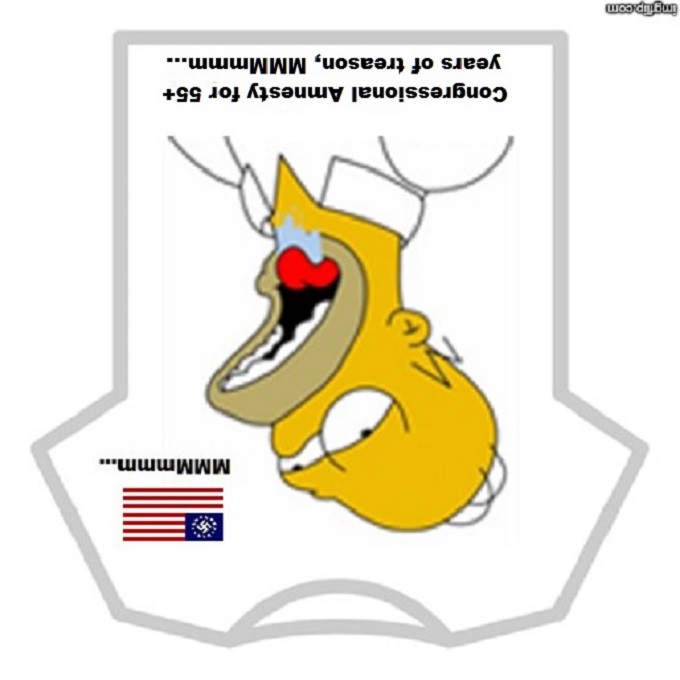 Sheeeeet America, the illuminated occultist-assholes in the Masonic Lodge who pulled ‘911’ and then eventually used your own fcuking military to steal Iraq’s gold and ship it back stateside in coffins were using your bloody taxes to do so you clowns, they used a kind of metrosexual psychology on you all of the way back to the Young Republicans, and ever since this phase started in 2001 they’ve been fcuking with your heads to make you respond feminine, manipulating you to get you as if you were women, literally to the point where instead of thinking like real men you ‘FEEL’ (Emote) like you were a Hollywood starlet acting opposite Audie Murphy (In your heads) who fights Japanese Muslims who attacked Pearl Harbor (sic) in a patriotic movie about defeating ‘Allah at the Battle of Guadalcanal’ or something ~ It was the bloody Masons and their Zionist masters who pulled all of this ‘911’ stuff, including that sham of a ‘Patriot Act’ which should shame you as a nation for anyone wounded  😦

They literally managed to get you all to emote like you were all women in a daytime ‘TV’ soap, while “Thinking” shit thru like you were Homer Simpson having a fcuking fistfight with the 41st president in an underground sewer on an old episode of the ‘The Simpsons’ ~ You got conned bad, and you’ll stay conned without that 100% treason amnesty which would (Might) free up those who know the dirt  😦

And my contribution? ~ What the fcuk’s that got to do with you?  😉

Umm, Oh dear, looks like Russia has the ‘SAME’ type of German-Jew descent Masonic scum (Under Swiss control) in charge as America has, has been double crossing me with the ‘Zionist Fait Accompli’ again ~ It also seems that whichever way I’d turn for justice, or even mercy, the same type of faithless treasonous slimy disloyal German Jew (Zio) Masonic scum that sent Germany’s Army to starve or freeze to death in Russia thru callous treason, or go into capture as slave labor unto death to build Zion’s deep underground Crimean bunkers, is in control there too  😦

They’re all the same type of faithless duplicitous illuminated German Jew descent Masonic swine as the Nazi’s were, and America’s current leaders are every day now proven to be? ~ Bummer, cause that’s exactly what I’d thought in the 70’s when I’d met my first Russian, a 33rd Degree Masonic army general playing footsies with America’s future (German born) 41st president (Birth name Scherff or ‘GHW Bush’ as you wrongly call him) and being the untrusting young man I’d been in the 1970’s,  I’d assumed he’d (They’d) break his word of honor and had cursed him (Them) accordingly up front just in case, merely keeping a positive perspective open if they surprised me by doing right by me instead of the Zionist evil I’d expected of them  😦

So anyway looks like I’ll die without justice after all, and only have the peace of mind of getting even up front to comfort me? ~ Oh well, I’d thought that’d be the case all along, mostly because Zion (All things Jewish in origin) sucks, and they’ll suck forever in the afterlife, but ‘Fcuk’ their god and ‘Fcuk’ their devil and ‘Fcuk’ them too  😉

Should be an interesting three decades for humanity ahead, what a waste 😉

I-do ‘NOT‘ own cartoons, old photos, or vids used in this blog ~ I’m not seeking one jot or tittle in financial advantage thru their use and claim it’s all fair use for the sake of a higher cause, and fair comment as well, along with some much needed albeit cynical timely humour and ‘VERITAS’ (Truth) plus a bit of hard core political philosophical and religious sarcasm, also in the cause of truth, mostly because somebody had to do it, and ‘I’M SOMEBODY’ you illuminated assholes, and all past present and future legal rights of any kind whatsoever  (Except denying me fair use) and all past present plus all future royalties also remain those of the original owners  😉

(PS: Watch out for ‘NSA‘ phishing using these blogs)  😦