Watch out, they’re probably tracing updated re-edited versions of these blogs to try to make a kind of computer ‘PHONE-TREE’ over who’s involved in the spread of any of these blogs ~ Your treasonous Fourth Reich Govt is despitefully using me to entrap people still, something it’s been doing for well over 45+ years now already 😦

…But Jesus referred to God as His Father!

Feminist clergy within the Church of England wants Christians to refer to God as a ‘she,’ despite Jesus referring to God as His Father.

Women and the Church (WATCH), an activist clergy group best known for pressuring the Anglican Church to accept female bishops, wants to modify the official church liturgy to include female language and imagery to describe God. “In the last two or three years we’ve seen a real resurgence and interest in feminism, and younger people are much more interested in how gender categories shouldn’t be about stereotypes,” the Rev. Emma Percy, a member of WATCH, told the Guardian.

“We need to have a language about God that shows God can be expressed in lots of diverse terms.”

God? ~ Fcuk her, she’s just a fascist cnut called ‘ISHTAR’ with a fat ass from eating too much McDonalds, and has teeny-weeny tiny tits if you asked meee ~ Now I’d rather worship something like um, myself when I’m living right like my dear old WW2 Vet step dad taught me, or like mom taught me when I’m being kind to old ladies 😉
.

If I’ve gotta worship an angry invisible omnipotent omnipresent cosmic magician, I’d prefer to worship that angry invisible omnipotent omnipresent cosmic magi thru believable fairy tales rather than some story about an (Incredibly brave) dead guy who’s blood was drunk by Zionist Jew high priests during Molech worship while he hung on a cross, and who’s flesh was butchered cooked and eaten after Joseph of Arimathea conned Pilate into giving him the corpse, whom the elite illuminated liars like to pretend came back to life after most of the flesh had been eaten 😦

So, I’m starting a new religion ~ In my religion, an angry magic Muslim fairy they call ‘ALLAH’ who was also invisible got his followers to steal a magic jet and fly it into a magic hole in the ground in Pennsylvania so fast this angry invisible magic Muslim fairy made the whole damn jet just disappear, and (Of-course) as is usually the case in all good religious fairy tales, “They all died happily ever after” mostly  😉 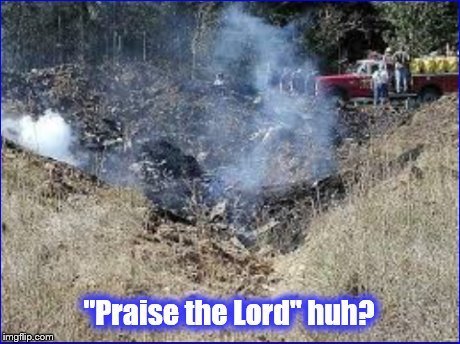 YEHOVAH IS NOT MOCKED.

Yes he is ~ Regularly, often every single day of the week most days  😉

No amnesty for 911 treason yet America  😦

You lying fcuking lowlife scoundrels you  😦

It has once again been proven that the TSA is pure security theatre, as an internal investigation found that in 95% of test runs, security screeners allowed weapons and mock explosives through, even after people carrying them had been through body screeners and been patted down.

The tests were conducted by Homeland Security Red Teams and the report released by the Homeland Security Inspector General. It states that in 67 out of 70 tests at airport checkpoints, TSA agents failed to detect dangerous weapons. In one case a man strapped a fake bomb to his back, and set off an alarm, but still managed to get past security after a pat down. The TSA issued a general statement saying that it employs a “robust security system that employs multiple layers of protection.”

After WWII everything in the US started to go ‘tits up’……I wonder why? Truman brought in the MIC Act – which Ike on his farewell speech warned us about. Not only that Dulles was creating his own ‘Empire’ and future wars i.e. Vietnam – The Bay Of Pigs was a CIA fiasco… CIA operated – their Intelligence for the mission was so good that Castro and Russia knew about it…. FO witcha!

“German-George” (41) stole a nuke that a group run by Cheney working for Adolph Eichmann (Double in the Israeli gaol) put under congress, one which Rumsfeld helped them to get past the guard on the old Masonic tunnel under congress, this was prior to the Cuban Missile Crisis, and then later that sad November day in 1963 the great Ranger sharpshooter Rumsfeld pulled the throat shot to immobilize the 35th president so that an aggrieved Cheney who hated Kennedy for the way Kennedy treated him when he was relatively brutally (Unofficially) questioned over doing the nuke thing for Eichmann could pull off the head shot from the Grassy Knoll, meaning you hit the fcuking ‘NOS’  (Nitrous Oxide) button going down hill 50+ years ago, with the murder of politically active US troops in Vietnam talking up what was really going down in South East Asia, murdered by Rumsfeld shooting them and\or fragging them on the toilet and ‘German-George’   (41) getting to them in the hospitals if they got that far, an obvious outcome when their bosses in CIA etc had so much material over the illegal treasonous things they’d already participated in to then blackmail them to further cooperate with ~ Then 38 years after ‘JFK’ you had the 911 thing go down, and ain’t that a mystery wrapped in a Muslim enigma ~ You’ll have to face yourselves eventually America, but probably it’ll be one day too late 😦
.

No proper amnesty for 911 treason yet America?  😦

NSA Is Offline So Here

Update: ALL THE BOMB THREATS TO U.S. PLANES FOUND NOT CREDIBLE: CNBC You don’t say. Now let’s find the NSA agent who dialed them in.

Just 24 hours after the NSA goes “dark” from “securing” the nation against terrorist threat (by recording and storing all domestic phone calls) we get this:

According to NBC, these threats are against planes already in the sky.

“We’re going to blow-up a balloon ~ No, don’t try to stop us, we’ve made up our minds and there’s no turning back ~ We’ll blow-up a balloon to show all those evil Muslim ppl in America’s govt they can’t just act like Nazi-Zionists whenever they get the urge to ride roughshod over the American people anymore”   😉