The ability of American politicians to pull god shtick out of their asses especially at election time and get a kneejerk almost mesmerised reaction from the American people is scary to say the least ~ To have the lowlife pigs try to sit in judgement on my mostly law abiding civic faith as taught to me by my parents pisses me off, to have them (Wrongly) judge me for my lack of it according to them after what they themselves have done to America really gets my goat ~ It’s almost but not quite as bad as having the treasonous swine try to use me as a distraction as they pretend they’re still patriots after their 911 sham and their patriot act swindle that followed hid their ‘FORT KNOX’ being emptied as the clowns continued the parade  😦

Terminology is important because it shapes the end result ~ Instead of calling those running this treason ‘THE ELITE’ as sites like Infowars often does, you should say Illuminated Masons of German Jew descent suckers, because that’s what over 90% of them are, up to and including your last 12 or so presidents since Roosevelt  😦

Open up your minds a bit to take into account that men like Don Rumsfeld and his Rockefeller descended biological father John J McCloy were not always married to their mothers and maybe the penny will drop about this long running 150+ year act of state treason ~ Take into account Prescott Bush also was of German Jew descent, and you start to grasp the bigger picture ~ “None dare call it Conspiracy” (sic) because they’re too scared to, but that’s what it is ~ Your German born 41st president had a lookalike American born half brother who’s identity he took over in the early 70’s and it’s been wall to wall German Jew Masonic treason for 150+ years ~ It’s been a long slow slide since Freemason Boss Tweed’s bearer bond rort gave them what was the equivalent of $1 to $8 Trillion dollars to pull Tunguska, steal Russia’s gold, create the US Fed, finance Nazis, steal Europe’s gold, store that at ‘ODESSA’ till 1973 and then use that to defeat you from Reaganomics thru to 911 and now  😦

YOU THINK YOU GET MY MEANING HERE?   😦

WELL I’VE GOT SOMETHING MORE TO SAY   😦

I-respect the Christ ~ I-think he had balls of steel and a heart of gold, plus a mind like a bear trap and definitely what’s known where I’m from as a ‘HARD BASTARD’ which is also a term that Poms use too, meaning he’s not a man to trifle with ~ He’s also the meek mild and gentle soul he spoke of too, to a point, yet he’s not even remotely what’s been made out of his words by those who warp them for twisted political or Luciferin light occultist ends, and if you’re merely using him up for some dirty purpose, well then I’m glad I’m not you sucker, cause you’ll lose  😦

Anyway, that said, don’t let people fool you or lie to you about me, what I’ve said in these blogs, what I’ve stated my beliefs are (Spiritualist & animist) or lie about what the Christ means to me ~ He’s not no son of some angry invisible omnipotent omnipresent Jewish cosmic magician (God) because no such being exists, but he also, he did once say ‘WE ARE ALL GODS’ and perhaps devils too  😦

There’s literally many 10’s of 1000’s and perhaps even 100’s of 1000’s of years of deceased spirits in both the real Hades who’ll try to steal your soul’s energy and\or a literal fake Judeo Xtian Luciferin deity in paradise who’ll try to subjugate your spirit, so you better work your shit out for yourself for real while there’s still time ~ Nothing is ever what it seems and it never was what it seems either  😦

96 per cent of Americans believe that the U.S. will witness more Baltimore-style riots this summer. The elite know these riots are coming, because to a large extent, their policies have created the environment for them. Wealth inequality, which is proven to cause social unrest, is at its worst since before World War II. But wealth inequality isn’t caused by a failure of capitalism, it’s caused by catastrophic Keynesian central bank policies that have instituted endless money printing and worldwide inflation.

They all cry about ww2, it all seems to escalate around then, is it that hard to research and see that Jews are behind it? Jews are behind the curtain of tyranny, war, poverty, despair, oppression, slavery, globalization, media influence/political corruption/AIPAC//congress, war machine, fascism, racism, no rule of law and basically the greedy insanity that is the destruction of America.

Et.Tu.Britass (To) charles ward • 3 minutes ago

Zionists Jews using the Masonic Lodge as a Trojan Horse since day one 😦
.
Ignoring both sides of the Civil War being run by the same Masonic Lodge serving International Zionism, the reality is that ever since the Tammany House Masonic Lodge chief known as Boss Tweed stole $100 million in Civil War tax money put aside to pay war debts ($1-8 Trillion today) consisting of simple cash bearer bonds and took that to Europe for Masons to use it to create Tunguska tech to steal Russia’s gold with nuclear terrorism, then to use the gold to create the US Fed, then use their US Fed to finance Nazis from their 1929 asset-strip of Wall St for the purpose of looting all Europe’s gold as well as re-creating the nation state of Israel, then hiding all of that looted at ‘ODESSA’ (Ukraine) under Masons Stalin und (sic) Khrushchev despite all of their Cold War bullshit, then that gold returning to the US Fed in 1973 as the illegal US Fed so called Chinese gold loan which then financed junk bond Reaganomics along with stealing 100,000 family farms thru rigged foreclosures before another asset strip of Wall St, plus the export of America’s industrial base overseas to break their economic independence ~ Thus it turns out that indeed world Jewry (Zionism) has indeed done exactly the same thing to the world as their own scripture records they did to Egypt around 3,600 years ago, as in steal all the gold und (sic) jewels + if you know what’s gone on behind the scenes, even kill all their children 😦
.

charles ward (To) Et.Tu.Britass • an hour ago

You forgot to mention them stealing all of America’s gold from Fort Knox Kentucky long ago too.

Et.Tu.Britass (To) charles ward • 7 minutes ago

Pasty Riot Act + the cover-story of the 2004 ‘ON-MESSAGE’ moment, and the international Zionists in control of American Freemasonry together conquered the American political media which, despite what their preachers told them, was the god of their soul ~ Yes, the gold is long gone ~ They ‘COULD’ just literally tell America what they did with it, how it’s gone to build some very esoteric space shit for an attempted escape by the chosen illuminated elite few, however the practical problem with that is that ‘ALL’ of the ‘NWO’ type of Masonry that McCain runs in America was sooo damn loose with the truth over the last decade they’re afraid that one truth revealed may open the floodgates ~ Those in control of what they (Laughingly) like to call illuminated ancient wisdom have long relied on what is simply a skillset which prides itself in “Always concealing and never revealing” a single thing that’s truthful in and of itself unless it’s capable of being warped to support one of their existing lies which they’ve used to cover their treason  😦

And that ‘Always concealing and never revealing’ includes their rather dismal occult, yet especially their treasonous pyramid of political conspiracies based on political blackmail and greed with which 6,000,000 American Masons control 320 million American people because Masonry feels it could never come up with enough lies to cover it, nor enough truths to answer it 😦
.

Fascist dogshit the lot of them ~ Very few exceptions 😦 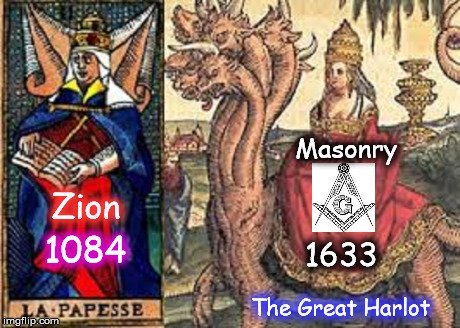 Now enjoy the sarcasm, if you can   😉

Bloomberg says in a post today that the “confrontation between Russia and the US” over Ukraine was “provok[ed]” by Putin’s annexation of Crimea:

“…Putin annexed the Black Sea peninsula of Crimea last March, provokingthe biggest confrontation between Russia and the U.S. and Europe since the Cold War.”

That’s odd, though, because the reintegration of Crimea into Russia (after a vote in favor – but remember democracy is what we say it is) happened, as Bloomberg says and BBC confirms, in March, 2014, about five months after violent, US-backed protests began in November 2013, and ended in the the elected Ukrainian president, Victor Yanukovych, being driven out of the country by, as BBC put it, “radical groups”, including neo-Nazis: see BBC’s “Neo-Nazi Threat in Ukraine“, Feb. 28, 2014.  (“BBC Newsnight’s Gabriel Gatehouse investigates the links between the new Ukrainian government and Neo-nazis.”  Later articles covering the topic were published by, among many others, Glenn Greenwald,Robert Parry, and even, albeit 8 or 9 months too late to make a difference, NBC)

Because they are run by our enemies?

Because they got the fcuking date wrong? 😉

That happens to idiots and sane ppl alike 😉

George Carlin used to have that problem 😉 . 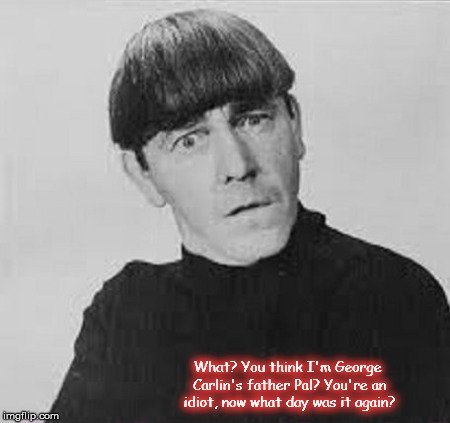 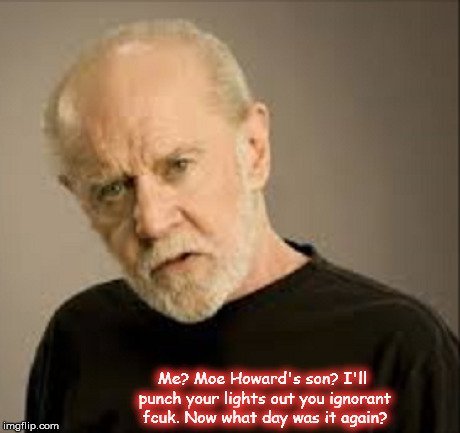 Et.Tu.Britass swede • an hour ago

swede (To) Et.Tu.Britass • an hour ago

Well, if there is more of his face…they would hide it now.

If you get caught with it, well, to jail you go…!!

For a limited time at the low low price of only $19.95 per month we’re offering a special ‘GET RIGHT WITH GOD AND WATCH GEORGE CARLIN BURN IN HELL FOREVER’ package to our special salvation club financial partners  😉

Yes folks, for only $19.95 per month we guarantee you’ll be able to sit up there in paradise with St Peter yet still watch old George Carlin scream in agony as he goes thru his best evil god hating comedy routines for the rest of all eternity 😉 . Act now and we’ll even throw in a special one time only ethereal asbestos suit and a complimentary pitchfork along with a free can of napalm for those of you who wanna go poke him in the ribs as he’s burning in eternal hellfire ~ So send your credit card details now to First Dayton Ohio Assemblies of God church by Email and you’ll be on our books and in our system before the devil even knows he’s lost you 😉 . 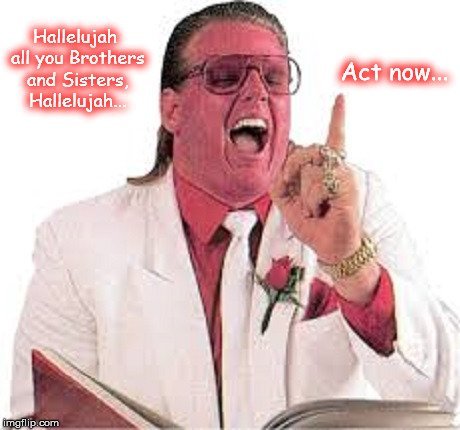 And my politics is sometimes big sarcasm too   😉

With an inner-core of truth + no bloody lies   😦