Planned By Nato And EU

As Ron Paul recently exclaimed, the war propagandists are very active and are winning over the support of many unsuspecting American citizens. So we thought the followingg 90 seconds of ‘pure Paul’ would provide a refreshingly different perspective as he explains, “I’m not pro-Russia pro-Putin, I’m pro-facts.” “The Ukraine coup was planned by NATO and EU… The best we can do for Ukraine is get foreigners out.”

Our government has no more credibility in telling us the truth about the facts that require us to expand our military presence in this region than Brian Williams.

‘NO‘ ~ (Said the choirboy to the old Bishop in the ancient Gaelic pre-Masonic fable) ~
America itself will have to learn to say ‘NO‘ to it’s congressional bishops soon too ~
. 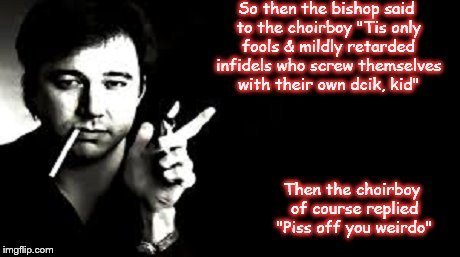 Unless, of course… you are marilyn manson and have two ribs removed ! Real sicko the Hollyweird’s made out of him after/during his stint in “The Wonder Years”.

Oh yea, his name is Brian Hugh Warner: I don’t know why I can’t post the pic – everyone denies it, but they can’t ever get their story straight on calling this fake stand-in Paul Pfeiffer or Josh Saviano nor whether if the guy is still an actor or a corporate Attorney in New York ? Manson IS the kid who played in the Wonder Years, but for some reason they don’t want anyone to know it. If you google his name and then click on images, you will see him as Paul.

Here’s a clue, but like Scully said to Mulder, it’s “Out-there”, cause that’s ‘NOT’ even the original Vietnam War Marine John Kerry pretending to be the ex marine veteran x Secretary of State Kerry ~  Your German born 41st US Pres also had an American born lookalike half-brother (Prescott’s boys both of them) who also went by the name of GHW Bush & was a gay failed baseball player at Yale, yet never flew in WW2 ~

That was his German born half brother who flew fighter bombers in the Pacific, who took over his persona entirely around 1970 in his run up for ‘VP’ in 1980 and 41st US Prez in 1988 = Reaganomics & in essence the beginning of the end for the US ~

I-could go on & on, cause there’s been so-very many full blown identity swaps, often tho not always with the original ending up ritually murdered, that I’d be wondering if your dcikless Marilyn Manson dude ‘PAUL’ or Brian or whatever who wasn’t totally evil in my eyes wasn’t just the official Zionist replacement for the Wonder Years kid (Actor) you brought up? ~ Seriously, the list of identity swaps would make your eyes water, and ever since split-blastocyst twins were achieved in the early 1960’s by Mengele’s brilliance and even ‘LITERAL’ human cloning using the same DNA yet different egg and womb in the 1970’s, the ability of world Zionism to con confuse and discombobulate (sic) the world along with America thru the use of identity swaps just seems to be like a red flag to a fascist Zionist bull and hey, the British royal family hasn’t escaped the Machiavellian identity swap intrigue either 😦

Neither has Russia escaped the identity-swaps, + at least one other ex Eastern block country ~ Secretly Zionist WW2 figures like Hitler Musso & Eichmann used doubles to fake their deaths, while Hess used one to fake his imprisonment in Spandau prison after 1947 ~ Even Lee Harvey Oswald, the guy who ‘DIDN’T’ shoot JFK, was said to have had a double which Zionists running CIA used to confuse everyone 😦
.
Hope you’ve got the freedom and brains to think it thru 😦
.
While I’m at it, merely for the sake of my blog mind you, those among you with the tech savvy who can get hold of some original high-quality digital photos and digital audio of Obama from 08 and Obama from 2012 will find that even tho he looks the same and sounds the same, the voice prints won’t match and the skin pore count per centimetre don’t match either, nor for Putin and Medev from 2000 to 2010 and for the British monarchy’s Prince William (Eichmann’s bio-son) during the same time span, and that’s something I’d love to leave alone in return for either a loan for lawyers for my own interests, or 5 lousy grams of heroin for none of your beeswax 🙂

The world truly is an amazing place as William Shatner said ~ I’m just waiting for the moment Zion goes something like ‘TA-DA‘ folks, and “Here’s what made all of the heartache grief tears blood and deception worth it in the long run” 😦
. 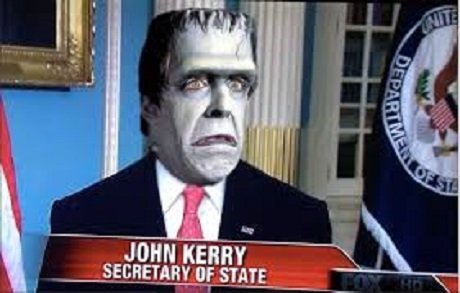 to Kill Occupy Leaders If

Paul Kennedy of the National Lawyers Guild in Houston and an attorney for a number of Occupy Houston activists arrested during the protests said he did not hear of the sniper plot and expressed discontent with the FBI’s failure to share knowledge of the plan with the public. He believed that the bureau would have acted if a “Right-wing group” plotted the assassinations, implying that the plan could have originated with law enforcement.

You would think plotting to murder people would at least be grounds for someone getting fired. After 9/11 they gave our liekly 9/11 conspirator CIA director, George Tennet, the medal of freedom award. They’d have to hang a lot of government people if justice for the 9/11 crimes happened.

“Rumsfeld? = Throat-shot” ~ “Cheney? = Head-shot” ~ That was back in 1963 ~
So the article thinks anything is possible, as in, anything? Is? Possible? Yeah? ~
Meanwhile, in the 60’s, America’s political masters did whatever they wanted ~
.
We’re much further down a Wonderland rabbit-hole now and it’s getting dark ~
Will you wake-up before you start WW3 me-wonders? ~ Me always wonders ~
.
Your secretly Zionist Masonic leaders have built a mousetrap & caught a rat ~
(Looks like a rabbit doesn’t it? ~ Well wake-up ~ It’s a big hairy Satanic rat) ~
. 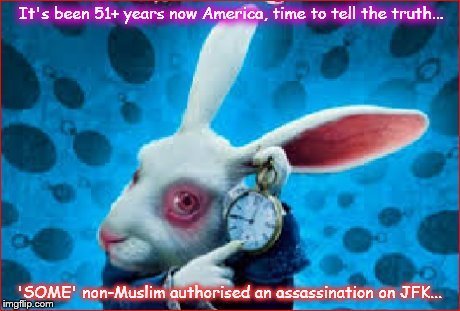 .
Don’t be too taken aback by my occasional use of deadpan wit, sarcasm, pathos or even a little bit of humour in these blogs about some of the heaviest subjects on the planet which lame-stream media never touches ~ Occasionally I’ll use humour to keep a perspective for myself, cause if you bother to read all 73 or 4 blogs whatever it is, it is indeed extremely heavy going ~ Bearing in mind these lying thieving murdering baby buggering (Christ killing) treasonous Masonic Zionist scum already murdered every single person I’d ever loved over a 50 year period, I’ll keep a focus my own way if that’s OK by you ~ (sic) ~ Anywaaay …  America & world Zionism ~
.

I’d rather be in Taiwan 😉