(A short tho expanded comment to an idiot implying the Vatican is the prime cause of political and spiritual evil in the modern world ~ Masons have been ordering lower-order pawns in the lodge to go after the Vatican for a while now already ~ They seem to be being punished for a few brave bishops honestly stating in public that the Christ’s corpse underwent ritual Molech worship human cannibalism for real, and then stating in private that if a real physical resurrection of said corpse ‘DID’ occur, then the resurrection of the body of Christ must have truly been a miracle of miracles cause it was literally stripped of it’s flesh and cooked up beforehand ~ That was a brave move for those bishops to take, yet it would have been bloody stupid to risk one day crossing the path of a hard man like Christ and lying about his fate anyway ~ I’m amendable to people who don’t take Christ for granted, whether they be Catholics Protestants Jews Muslims or even radical hardcore atheists who don’t believe none of that omnipotent omnipresent angry invisible Jewish cosmic magician crap)

A comment by AlwysReady • a day ago ~ (On the ‘Infowars.net’ site where the title of the article and\or vid was on the ‘Patriot Act’ and changes it’s bringing to America)

“This is the New Inquisition from the Vatican; they have been trying to get full control over everyone since the 1500’s, they are almost there” ~

(UNDERSTANDING IS THE GOAL)

Are you implying the omnipotent omnipresent angry invisible Jewish cosmic magician god (sic) that the Catholics & Protestants worship creates whores like some Protestants claim the Catholic church is described as in Rev 17:5? ~

Maybe an omnipotent omnipresent angry invisible Jewish cosmic magician isn’t real? ~ Or maybe he’s real yet he’s so frigging incompetent he’s just a frigging idiot and created a whore from the body of the Christ? ~ Or perhaps, just maybe perhaps, religion has long been a mask of deception designed to confuse simple minded ppl between their left brain and right brain, and their hearts and heads? ~  There’s a very unhealthy (Secret) push through the Masonic Lodge right now to try to blame the Vatican for what the secretly Zionist Masonic Lodge itself has done for the past 400 years ~ Religion has always been a mask for real powers with corrupt money to mislead people ~

Judaism was no different, with that so called ‘EMPTY TOMB’ truth being completely misinterpreted to claim the incomplete cadaver of the Christ has been miraculously restored to life by the aforesaid omnipotent omnipresent invisible (sic) Jewish cosmic magician, while that mangy Roman-Jew dog Saul of Tarsus was murdering the Christ’s true followers and bumping the real teachings of Christ from center stage with that ritual blood-magic omnipotent Zionist Masonic-kabala pseudo omnipresent invisible angry deity waffle of his turning reasonably sane people into total frigging idiots ~
.
My point? ~ You think ‘The Vatican’ causes the world’s troubles? ~ Get real ~

The Vatican was conquered in 1084 by the same future British Israelite Norman forces that came through Europe via Scandinavia after first giving Britain’s Prince Harry the Great a short sharp stab in the eye with a sharp shtick in 1062 ~ This mysterious military force which conquered the known world yet whom all official historians are notoriously vague on when it comes to origins emanated from the post Solomon Assyrian diaspora ~ The Norman military soon became the ‘Templars’ in the crusades and they became the Masons in the 1600’s ~ The problem is ‘NOT’ the Vatican ~ The problem is stupid blind fools being led by evil blind fools who’ve lost truth ~ Why don’t you deal with Zionist owned Masonic run media that gave you 2 jets into 3 skyscrapers before you pick on the Vatican ‘OR’ Tel Aviv ‘OR’ Mecca? ~
.

The real ‘SATAN’S’ aren’t the devil either, tho don’t mess with them ~

TIME TO REALLY START HONESTLY THINKING ABOUT THE CENTURY PAST ~

“They destroy a decade ahead by lies they speak to hide 5 previous decades”
Believe it or not, that’s ‘BENITO MUSSOLINI‘ in person back around 1974-5′ ~
.
(That’s a pretty accurate although paraphrased version of what that tough old Masonic secretly Zionist fascist Neapolitan Illuminati-Jew stated in person to me back in 74-5 ~ He was trying to give me a relatively honest big picture view of the mistakes the ‘Order of the Ages’ had trapped itself within ~ I’ve little time for people who would burden their kids with lies they couldn’t face or honestly deal with themselves ~ His statement was very profound) ~
.
You’d wish Sting’s old song “I-hope the Russians love their children too” is true, what with the dangerous game liars are playing ~ Hope is a nice game to play if you’re only a child in the marketplace ~ Honesty and truth are better games, best played with 5 aces in the pack before you deal ~ Follow the link to learn how the hell in Hades I could have talked to Mussolini ~

THAT’S THE REAL DEAD-SERIOUS BIT ABOVE ~

MY (Bad) POLITICAL HUMOUR UNDERNEATH ~

(TO SOMEONE BLAMING THE BUSH FAMILY) ~

Bush is a war criminal, just not in the U.S. corp. I wish we’d extradite his ass to any of the countries that have found him guilty. Well all of them that have been found guilty of war crimes, as there are many more than just bush.

Et.Tu.Britass (To) anon212 • 12 minutes ago
Hanging the Bush boys and their daddy is a noble idea, yet to be fair you’d also have to find a suitable punishment for all of the others in their respective lodges who helped them too as well ~ With all of that in mind I’d strongly suggest you hung the Bush’s with ropes made out of donated Masonic scrotums woven together in a bipartisan show of selfless patriotism and true love of country ~ If you want ‘ALL’ of the bad guys gone you’d also need to hang Rummy and Cheney ~ It’ll take a ‘LOT’ of scrotums to make enough ropes to hang those dcik’s, yet surely the god of the Masonic Lodge, IE; the lord who reigns in Zion, will be pleased with their sacrifice and reward them? ~
.
.

Lets use ‘Twitter’ to start a revolution ~ ‘COME-ON’ ~ It’ll work ~ It’s what they do in all of those repressed foreign countries we screwed up ~ We’ll just think of some catchy phrases, then add a few pithy truths to them, load them all into 180 chars or less, then let loose a broadside with all guns blazing 😉
.
What? ~ Whaaat? ~ That’s illegal now? ~ What’s illegal? ~ Twitter? ~
“Content liable to cause unrest?” ~ “Slandering the head of state?” ~
Whaaaaat? ~ The NDAA? ~ The President? ~ The White House? ~
Now come-on ~ Huh? ~ CIA? ~ NSA? ~ Congress? ~ Oh-shet 😦 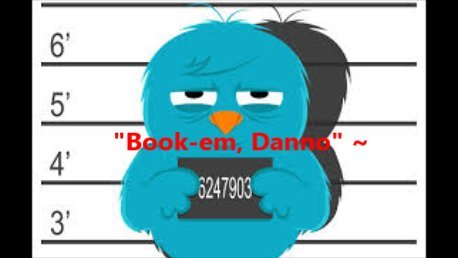