and Shady Dealings of

At the end of the year in which Hillary Clinton left her position as Secretary of State, 2013, the Obama regime’s USA was voted, in Win/Gallup’s global poll, as the greatest threat to peace in the world, with the runner-up, US-ally Pakistan, receiving three times fewer votes, and Russia receiving twelve times fewer votes. […]

If Hillary Clinton could have been US president in 1800, she would have fit right in, as she does today. And, dear god, Trump and the others would be worse. This is reader-supported journalism. Click here (Don’t ~ It’s a trap) to participate and, as a bonus, get the author’s essay on the historical background to the ‘Black Lives Matter’ movement. Robert Barsocchini focuses on force dynamics, national and global, and also writes professionally for the film industry.  Updates on Twitter.

America’s elite Masons, high-ranking 33rd degree often illegitimate old world ones of German Jew eugenic breeding programs descended from bloodlines that placed their rat-bastard offspring in positions of hidden power throughout America since the Civil War days, fear American people forcing congress to pass a 100% amnesty over treason in exchange for 100% truth because that one single simple move would take away the biggest threat they hold over lower order ranks to force conformity to their current agenda which, as most of you might have noticed, is departing from constitutional republicanism and returning to what amounts to feudal rule…

Seriously, if they speak-up the system crushes them with no amnesty 😦
Zio-Masons know they’ll keep you running round in circles without-it  😦

Quidam • a day ago

Swiss authorities were on the lookout for five alleged Muslim terrorists thought to be planning an attack on Geneva this week. The men were alleged to be 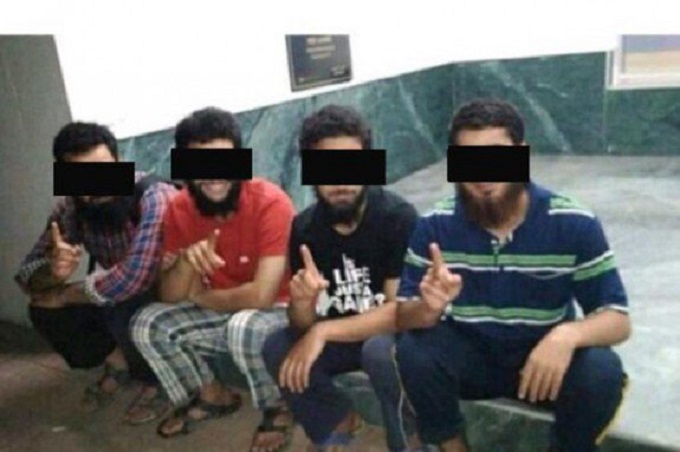 Four terror suspects pictured flashing the ISIS sign were sought in Geneva, image via Le Matin/Twitter. Two of the suspects were arrested on Friday. The men were transporting explosives and TOXIC GAS for an alleged terrorist attack.

Swiss authorities said Saturday that two people of Syrian origin had been arrested on suspicion of transporting “explosives and toxic gases” as part of a probe into a terror threat. The two suspects arrested Friday are accused of the “manufacture, concealment and transport of explosives and toxic gases”, the federal prosecutor’s office said in a statement. They are also under suspicion of violating Swiss law prohibiting “groups like Al-Qaeda, Islamic State and similar organisations”, it added. Several Swiss media reported Friday that two people had been arrested in the Geneva region and that traces of explosives were found in their car, as the western city remained on alert due to an increased jihadist threat. Geneva’s public prosecutor has announced a news conference for later Saturday.

SIMON ELIOT • a day ago

Where they get their clothes from? ~ Pull an armed raid on a Salvation Army donation bin somewhere? ~ Or raid the wardrobe of a 1970’s New York City Jewish sitcom about a group of crazy kids and their zany teacher ‘Mister (Gabe) Kotter?’  😉

Awe C’mon America ~ Bollywood could do better than this, but alas…
The twin gods of ‘Shiva’ und ‘Stupa’ have misled thee from the path…

Democrats are seeking to limit the political fallout from the attack in San Bernardino, Calif., by pressing for legislation that would prevent terrorism suspects from buying a gun. Leaders in the party think they have a winning message in pushing legislation that would ban gun sales to people on the federal terror watch list, and have made the bill a focal point of their response to the shooting.

Throughout the week, House Democrats repeatedly interrupted floor proceedings with protest procedural votes aimed at calling attention to the measure authored by Rep. Peter King (R-N.Y.). Senate Democrats and the White House have talked up the bill as well. The aggressive push underscores Democrats’ desire to address public fears about terrorism without attacking President Obama, who is under fire from the GOP for his handling of the Islamic State in Iraq and Syria (ISIS).

The Founders Want to Know • a day ago

‘“How can somebody who pledges allegiance to ISIS be allowed to purchase a  gun here in America? We would never give a set of keys to somebody who was drunk to get behind a wheel,’ Rep. Donald Norcross (D-N.J.) said on the House floor.” ISIS isn’t the issue. The issue is how can we accept an unconstitutional process which secretly places people’s names on a list intended to deny them the right to fly, buy a home, get a job and now to buy a gun, all without due process guaranteed by the 5th Amendment? Is an autocracy what we have become, a nation of powerful men rather (Than) laws

maleRDH (To) The Founders Want to Know • a day ago

Amen. The truly frightening thing is that the average American isn’t bright enough to understand this concept, don’t want to, and won’t until it’s too late…

I believe, sadly, that that spells checkmate.

over and over and over again and then some…
.
If that leaves you speechless too, if having nothing rational to say about saying nothing rational leaves you speechless, then write down what you’re not saying and send it to ‘BBC’ Television in London at their new Monty Python show “It’s too bloody late, Senator John McCain left me speechless again” and mark it ‘URGENT’ and they’ll get back to you within about four decades to discuss putting your point of view…

into that new show they’re doing for Britain…
.
Based on an old idea called “The Spam Show” it’s about the trials troubles tribulations and stupidity of an imaginary North American Dictatorship…

where the people are always left speechless…