Heard about ‘NIGGAZ’ in the ‘FBI’ back in the 1960’s before crack was sent by god (sic) to decimate their family structures, a plausibly deniable ‘CIA’ guy whom you’d know by name if I’d say it here told me, guys with law degrees plus a good knowledge of the system, and to this day I’m still wearing a small piece of positive because of what I’d learned about them, along with a bit of respect for their (True) history which includes some of the ‘PANTHERS’ (Tupac’s mom) among others, tho not all of them  😉

Obviously all people in any one racial or national group are not all the same, there’s good, there’s bad, there’s boringly indifferent, there’s cocksuckers and faggots and swine and hypocrites, and then there’s ‘NIGGAZ’ ~ If you wish  to show respect you use the term  ‘NIGGAZ’ but maybe make sure you know them well before you do, just so they don’t think you’re just another ‘PECKERWOOD’ creep wanting something  😉

Things gone bad in America? ~ Bet they are  😉

Shit was never good ~ Children had ‘ALREADY’ disappeared from that church in Georgia that the good ol’-boy Zionist Masons bombed all those years ago, but bad shit was hinted at in the original ending of the ‘Mandingo’ movie too, cause the slave Mede wasn’t boiled down for soap or dog food or whatever, the original intent was to imply he was literally cooked up and literally eaten in ritual Molech worship, a practice the southern (Zionist) Masonic ‘KKK‘ (siv) brought with them from England and greater Europe when they first invaded America, and they did it to American Indian African American and poor whites among their own too as well, and they still do too 😦

So in the real world ‘Niggaz’ if you say things are bad, well, I-believe you, but if I’m walking down the road and there’s ten of you and you just see me as Whitey and beat the crap out of me, how will you know that I’d suffered at the hands of the same cnut’s as fcuked you over? ~ I’m not preaching, be as angry as you wish, and don’t forgive or forget, just don’t punish me or someone like me for what someone else did ~ To that end, I-just want you to know that 9 little black Aboriginal babies + 5 older Aboriginal kids were ritually murdered (Tortured) in front of me as a kid in Australia in the 1960’s before I’d turned 13 by your America using your tax money and I’m still a country mile away from true recognition let alone acceptance or justice, so life sucks, then you die? ~ Again, if things are bad, they were bad back then too, maybe it’s worse now? ~ They (American Masonic Zionists working for the US Govt) literally tortured me 4 times by the age of 15 with the first time was done with electric shock torture on the legs and bum at only 5 years old, yet Jeeze fcuking Christ in a chicken basket, them treasonous lying cocksucker Masons in your American congress, the same ones doing the evil stuff at Bohemian Grove, they ‘STILL’ get air time in your minds? ~ ‘Faaaark’ ~ They don’t deserve any of the residual left over oxygen molecules in one of your methane saturated stake roast chicken farts  😦

All tortured to death by being slowly cut up with knives  😦

I’d already been raped tortured and also given drug based brainwashing as well as being prostituted in a ‘CIA’ run pedo snuff movie political blackmail thing as were many other kids, as you’ll read below, some black ones, even babies, were tortured to  death in  front of me to the point where at age 7 or 8 I’d been feeling like giving up on everything ~ This ‘CIA’ man told me a little story  about what he called ‘NIGGERS’ and what I’m calling ‘NIGGAZ’ because it’s a matter of respect  ~ He said they were kind of feared, to the point where, at that time, no one in world Zionism  thought it was worth  fcuking with them, simply because of their knowledgeable (Fierce) way of  fighting back whenever anyone messed with them  ~ They (World Zionism) preferred to wait a while until the crack  cocaine did it’s  work and the Negro was  defeated by the destruction of their strong family structures ~ That’s  the way it went down too, but they sure did fear these ‘Shotgun’ niggers with the law degrees in the ‘FBI’ back then, feared intruding on their personal space, as well as or perhaps  more so feared what kind of mighty political leaders those ‘FBI NIGGAZ’ from the 1960’s could’ve become without losing ‘MLK’ or losing 2 generations to the crack  😉

It was the respect jackals have for a pride of lions  😉

In a lively, well-received speech at a Michigan GOP political conference in Mackinac Saturday, Republican presidential candidate Sen. Rand Paul, R-Ky. criticized Democrat presidential candidate Hillary Clinton for her failures as Secretary of State and her “damn shenanigans.” ~ Taking aim at the former Secretary of State, Paul said Clinton had “approved $100,000 for an electrical charging station for the embassy in Vienna, but denied money for security in Libya.” ~ “They spent money on Facebook ads, seems the state department didn’t have enough friends; but yet Hillary denied additional security to our ambassador,” said Paul. “I think by her dereliction of duty, Hillary Clinton should forever be precluded from holding higher office.” ~  “Why did Hillary need a private server? The Clintons are up to so many damn shenanigans,” he said. “I’ve never seen anybody so abuse their public office to enrich themselves,” continued Paul. “I think even Democrats are having second thoughts.”

No not Ronald Dumsfeld, no 😉 (To) ithakavi • an hour ago

Barbara Boland says Paul used the ‘BLAST’ word, so I’m reporting him to the National Centre for the prevention of people using the Blast word, or the old ‘NSA’ as they used to be known among the olde-worlde patriots 😉
.
We got lots of tech to fight terrorists like him now  😦 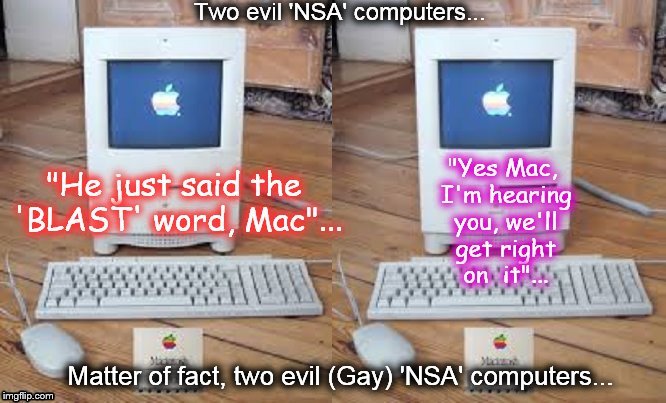 And Europe didn’t have enough refugees……

Nor America have enough bullshit, tho thanks to the collective efforts of the McCain’s Clintons and Kerry’s ‘ALL YOU NEED IS LOVE’ ~ It’s all good because their ‘CUP RUNNETH OVER’ with it now brothers and sisters 😦
.
You just feel all the ‘LOVE’ as they lead you to the slaughter, oh hang-on, meant to say “Lead you to the love” ~ Yes, love, love, love, yeah, love  😉

“Your honour, we find the Australian defendant guilty of being ‘THE‘ most sarcastic (Honest) bastard on earth, and suggest he be hung by the balls til dead, then sentenced to listen to Ray Conniff and Perry Como for the rest of all eternity, and in the hellfire too, not just in the music lounge in Hades”  😉

GOP presidential candidate Donald Trump on Saturday said he’s not “morally obligated to defend the president” against inaccurate claims from supporters. Trump, who is leading in the polls for the Republican nomination, blasted out a series of tweets amid mounting criticism that he did not cut off an event attendee who questioned President Obama’s citizenship and religion.

(PS: Watch out for ‘NSA‘ phishing using these blogs)  😉